In recent years, IoT (Internet of Things) has attracted attention in the fields of social infrastructure and facilities as well. By installing a sensor onto a water supply pipe to obtain pressure information at a faraway site and turning the system into an IoT-based system, it becomes possible to grasp events such as abnormal pressure changes and breakage of pipes without carrying out site surveys, and we consider that the IoT-based system will be capable of being utilized for improvements in daily management work and for quick response to address troubles.
Sensors that are fit for an IoT-based system require that multiple sensors should be capable of being installed easily and that the sensors should have a degree of freedom in installation, and they are required to be of a small size and low cost.
Although so many types of pressure sensor products have been commercialized, those for applications for high pressure and liquids including water supply pipes have a large and robust construction and their prices are high, and therefore we think that the development of pressure sensors that can meet the objectives is still inadequate, and we are engaged in the research and development of pressure sensors for liquids that can realize small size and low cost.

In this study, in order to realize a small size and low cost pressure sensor, we have employed MEMS (Micro-Electro-Mechanical Systems) technology that creates mechanical structures on silicon substrate or glass substrate, etc. by utilizing semiconductor manufacturing technology. Furthermore, we are engaged in the research and development of sensors that use piezoresistive effect among the pressure sensors that employ the MEMS technology.
As the construction of commonly used piezoresistive sensors, a diaphragm is formed by plrocessing a part of silicon substrate into a thin piece so that the amount of displacement will increase when having received pressure, and a piezoresistor is formed on the diaphragm whose resistance value changes when having received stress (Fig. 1).
Since the diaphragm deforms in line with the magnitude of the pressure it receives and the resistance value of the piezoresistor changes accordingly, the pressure the diaphragm received can be recognized by accurately reading the changes in the resistance value of the piezoresistor.
Also, since a piezoresistor changes the way to receive stress depending on its layout method (*), in an actual sensor a bridge circuit is formed with piezoresistors by utilizing such characteristics, and output is obtained by means of electrical measurement (Figs 2 and 3). In the case of a piezoresistive pressure sensor, if thermal stress resulting from the difference in thermal expansion coefficient between a package that is mounted onto the object to be measured and holds the sensor chip and the sensor chip is transmitted to the piezoresistor on the diaphragm, it will become the cause of an error in pressure measurement. If high precision measurement is required, temperature compensation is necessary, and it leads to a cost increase due to the addition of an inspection process and an electrical circuit, etc. .
The piezoresistive pressure sensor being developed has been provided with a trench in the route for the transmission of thermal stress in order to reduce the thermal stress to be transmitted to the diaphragm, thereby seeking the reduction of the thermal stress to be transmitted itself (Figs. 4, 5, and 6).

The pressure sensor on this subject has been designed from scratch, while requesting technical consultations from Professor Osamu Tabata at the Kyoto University of Advanced Science. For this reason, we started the research at a stage where there was concern about whether an appropriate output would be obtained in the first prototyping. By considering the design from his advice and the details of the investigation sufficiently, we could obtain an appropriate output from the beginning of the development. However, because there are some portions that have not been satisfied in relation to the final target, we are making improvements in the sensor chip and package. We plan to pursue commercialization through continued research and development in the future as well. 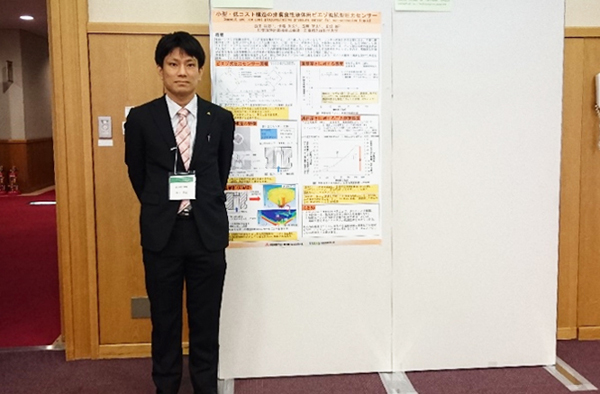 The MEMS pressure sensor presented here was exhibited in The 36th SENSOR SYMPOSIUM in posters.