We are engaged in research on AI because creation of added value for can be anticipated by incorporating AI technologies into microcomputers that are mounted onto meters which are the major products of Aichi Tokei Denki Co., Ltd.

AI technologies include various fields, and among them, examples of number recognition are presented this time that uses Convolutional Neural Networks (called CNN below) as research on image recognition technologies.

In CNN, operation that is called convolution which appears in the image processing field as well is applied to an image that has been input. By means of this operation, the features of an image can be emphasized. Although in conventional machine learning a human needed to specify features, this method enables the features to be extracted automatically.

In order to make precise predictions, learning needs to be done in the first place in order to make a brain. Giving an image for learning and a right solution value for such image is repeated. Based on a deviation of the result of prediction of the image from the correct answer value, internal parameters to be used for convolutional operation, etc. are optimized. By means of this, a brain is completed that specializes in number recognition (that is good at extracting the features of a number), if, for instance, the image of a number is used as data for learning. 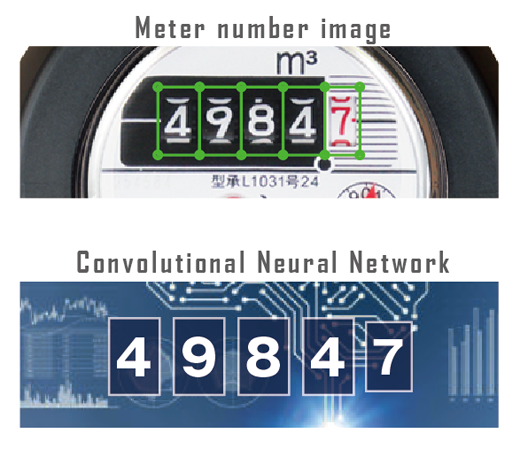 It is a trial to predict the amount of use of water from an image of the number dials of a meter by using CNN.

In order to make it possible to deal with various types of numbers, AI has been made to learn more than one thousand images that show different types of numbers, and conversion and compression have been performed so that the brain that has thus been completed can be operated with a microcomputer, and number recognition has been done, and consequently the AI that can predict numbers with high precision has been completed.

■ What kinds of problems and findings were there in the image recognition of numbers by means of AI?

At present, we are creating an AI brain by using the deep learning techniques that attract the most attention among AI technologies.
By means of the AI brain thus created, a required answer (example: a number is recognized from image data obtained with a camera) is obtained by inputting the measured data. But we feel anxiety to some degree about the utilization of the AI brain in a state of a black box in which a correct answer rate of 100% cannot be obtained or with which no theoretical grounds can be seen as to what kind of algorithm is used to derive the answer.

We plan to launch AI technologies in future as those which can be provided to society without any problem, with a view to eliminating such anxiety, by accumulating a lot of verifications through implementation of further investigation and research.